I spent this past Sunday modeling for a project that my friend and co-worker, Chaseedaw, is putting on called the Scarred Photo Gallery. A few years ago, Chaseedaw organized the Alive Again Fashion Show, which featured a cast of models who were all cancer survivors. One day at work, she mentioned to me that she was putting together a photography gallery of models with scars to help fund the fashion show. Having a long scar across my stomach (and also enjoying the idea of being shot by professional photographers), I volunteered to model for her gallery.

My scar was left behind from an operation to remove my gall bladder when I was less than a year old. Two of the other models, Erica and Olympia, had scars from lymphoma and a rare type of sinus cancer, respectively. The make-up artist, Tasia, also volunteered to be shot. She had scars on her fingertips from testing her blood sugar to monitor diabetes. 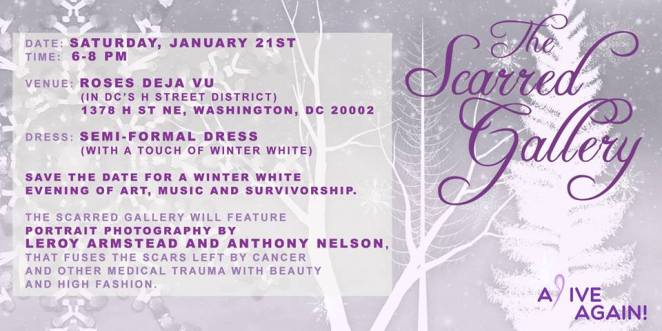 It was so refreshing to hear the perspectives of people who had gone through something that threatened their very existence, like cancer. Surviving a life-threatening illness had given them a sense of clarity and gratefulness for life that I picked up on when we shared our “scar stories.” Most of us, myself included, are still struggling to maintain perspective on the important things in life. At least I know that it can sometimes seem like an effort to hold onto my appreciation for life when the slightest stressor enters the picture.  It was really cool to be reminded that just being alive and healthy is a wonderful thing to be thankful for.

The idea of scars, both physical and emotional, is fascinating to me in how these experiences shape us. Being so young, I don’t remember the events that led up to my surgery, but I imagine it must have been scary for my parents to go through.

Emphasizing and even showing off the physical evidence, the scars, of experiences that have changed us is such a cool idea, especially in photography. Imperfections like these are usually airbrushed out of photos, or retouched. A physical scar is often thought of as ugly, or at least not beautiful since it threatens the symmetry and order that we normally associate with attractiveness. It was empowering to display these physical flaws, and zero in on them.

I have always been an avid follower of fashion, but I’ve never been in any kind of a photo shoot or on the set of a modeling project before. It was exciting to watch the visions of the photographers, the stylist, Camille of JK Fashion Closet, Tasia, the make-up artist, and our project manager, Chaseedaw, collide and make something great. Seeing creativity in action always keeps me grounded and “in the moment.”

I can’t share any photos now, as they will be unveiled at the Scarred Photo Gallery during inauguration weekend on January 21st at Roses De’Javu on H Street. I’m looking forward to seeing these visions come together next month. Tickets are now available.

View all posts by lafilleamericaine