I’ve been thinking about roads and paths lately, maybe because it’s graduation season and everyone seems to be moving on with their lives in one way or another. Or perhaps because the long, cold winter has finally let up and its become both spring and summer at once. Anyways, I hear that expression a lot from Frost’s poem The Road Not Taken, “I took the road less traveled; Take the road less traveled,” especially around this time of year. Almost always, its used erroneously to mean that “I chose the unconventional path; I did the thing that was not expected of me and that has changed the course of my life.”

Why is the last stanza of Frost’s most well-known poem so purposefully ignored? The irony is evident in it’s first line: “I shall be telling this with a sigh – somewhere ages and ages hence,” as Frost notes that in the future, when he tells his story about choosing between the two paths, he will say that he took the road less traveled, even though this is false. The reason he says it with a sigh is because it’s paradoxical: there is not such thing as a road less traveled, there are only roads that look very similar, and we are forced to choose between them.

So why do we say we “took the road less traveled by”? Why is this phrase from Frost’s poem a theme surrounding graduations and other celebratory milestones? Do we want to derive some meaning from the choices we make when none exists? Are we trying to convince ourselves that these choices weren’t really arbitrary, but instead we took a certain path for a reason?

After all, we never know exactly what lies ahead when we decide to go to graduate school for a certain subject, take one job as opposed to another, or move to one city versus another. We try to look down each path as far as we can and we attempt to find out as much information as possible before deciding. As the poem goes, “as for that the passing there had worn them really about the same,”: at the end of the day, both paths seem almost the same, yet we can only choose one.

In trying to derive meaning from our lives and our pasts, maybe we will tell the story at some cocktail party or reunion about how we “took the road less traveled.” Maybe that’s okay; we need logic and reason to explain our pasts and choices that don’t always make a lot of sense. There is no road less traveled, only roads, but perhaps it’s still okay to misinterpret the poem.

The Road Not Taken (By Robert Frost)

Two roads diverged in a yellow wood
And sorry I could not travel both
And be one traveler, long I stood
And looked down one as far as I could
To where it bent in the undergrowth; 5

Then took the other, as just as fair
And having perhaps the better claim,
Because it was grassy and wanted wear;
Though as for that, the passing there
Had worn them really about the same, 10

And both that morning equally lay
In leaves no step had trodden black.
Oh, I kept the first for another day!
Yet knowing how way leads on to way,
I doubted if I should ever come back. 15

I shall be telling this with a sigh
Somewhere ages and ages hence:
Two roads diverged in a wood and I—
I took the one less traveled by,
And that has made all the difference. 20 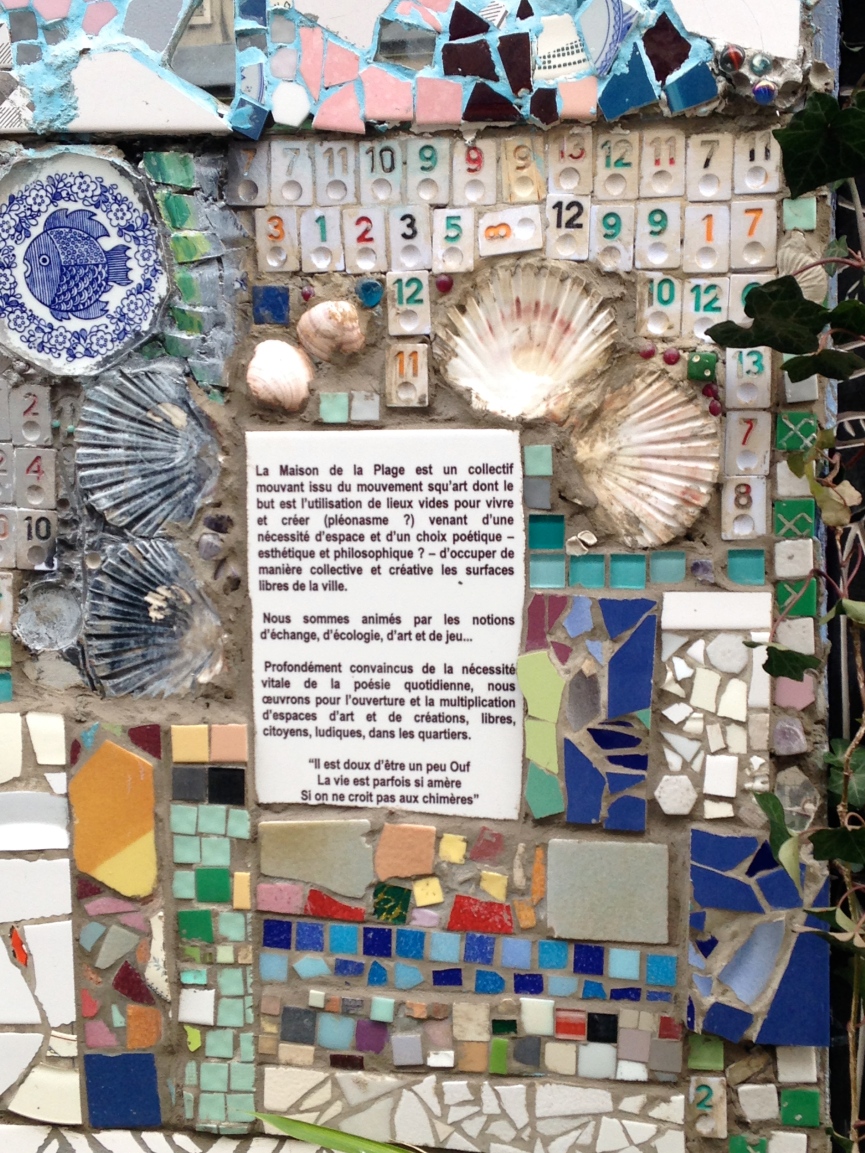 I found this mosaic, La maison de la plage, or beach house, when I was exploring Paris one day on a wall in the 20ème arrondissement.

La Maison de la Plage is a moving group derived from squ’art movement whose goal is the use of empty places to live and create from a need for space and a poetic choice – aesthetic and philosophical – To collectively and creatively occupy free surfaces of the city.

We are driven by notions of exchange, ecology, art and play …

Firmly convinced of the vital necessity of everyday poetry, we work for the opening and multiplication of art spaces and creations, free, public, recreational, in the neighborhoods.

We are driven by notions of exchange, ecology, art and play …

“Life is sometimes only bitter,

If we don’t believe in dreams.”